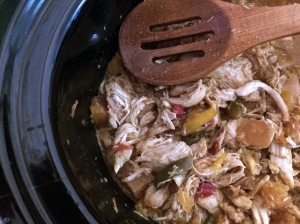 I was looking for a new chicken recipe and found this one in a blog post about slow cooker recipes.

We tried it at Cooking Club and it was VERY tasty… but a little bit of a stretch to get it done during the 6 hours we get together to cook.  And if I’m going to get a slow cooker recipe ready ahead of time, it has to be SUPER easy.  Back to the drawing board.

The first thing I tried was swapping out the fresh red bell pepper for one of my favorite recipe shortcuts: a bag of Trader Joe’s FIre Roasted Bell Peppers and Onions.  I tried to sort of “freestyle” replicate the sauce from the skinnyms.com recipe and it came out okay.  But I didn’t love the onions or the “fire roasted” aspect… and my sauce just wasn’t all that.

It was serviceable, but I was looking for something even easier and even tastier, so, back to Trader Joe’s I went and discovered their Island Soyaki sauce.  Well, third time’s a charm!  This was totally simple and incredibly tasty!

Put chicken, Soyaki sauce and pineapple in slow cooker and turn on Low.

After 4 hours, add the frozen peppers.

After another hour, remove the chicken with tongs, shred it, and mix with the sauce and peppers.

Cook on High for another hour to thicken the sauce.

A quick note:  I am not personally too concerned with sodium or sugar right now, but I want to point out for those that are that because this recipe is dependent on some processed/prepared foods, those numbers are pretty high.  If those are concerns for you, I suggest you check out the recipe I originally found… it’s a little more work, but, that’s the trade off.

Edited to add… we made it even BETTER!  Still relying on the Island Soyaki sauce, but, back to the original recipe’s inclusion of fresh peppers just at the very end of the cooking.  So, put chicken, Soyaki sauce and pineapple in slow cooker and cook on low for 4-5 hours, until the chicken is done and shreds easily.  (You’ve got that whole 5 hours to get around to cutting 3 large bell peppers into 1 inch pieces!)  Remove the chicken, shred it, and mix it with the Soyaki and pineapple.  Add the peppers and continue cooking for about 15-20 minutes.

What do you want to cook?

How do you want to cook it?